WRAITH THE OBLIVION AFTERLIFE QUEST 2 GAMEPLAY // How Scary is it? Playthrough Part One / Quest 2

Heading into the world of horror I was prepared for jumpscares. Initial marketing materials & trailers set the scene for a game that was going to make me jump out of my skin but the truth is Wraith The Oblivion Afterlife VR is actually in it for the long haul; the lingering scares & the unsettled feeling of slowly making your way down a long dark corridor rather than monsters popping up every five minutes. During my first hour the game made it clear that cheap thrills & jump scares certainly aren't the aim here, instead we are given a healthy dose of slow burn tension, fantastic sound design, atmosphere building & cat and mouse stealth sections filled with dread. Wraith The Oblivion Afterlife is also centred around a deep compelling mystery, seeking out the pieces of the story & listening to previous inhabitants of the Barclay Mansion helps to set the scene & players are rewarded for searching every corner of the world with extra lore & information. What actually happened here & how did I wind up dead are the driving forces behind the game, in the early stages at least...

Those who are looking for a slow burn, but at times incredibly intense, horror tale with a mystery to unravel at it's heart will find a lot to love here in Wraith The Oblivion Afterlife. Certainly one of the nicest looking games on the Quest 2 platform & one that is BEST experienced with a pair of decent headphones (honestly, the sound design is 75% of the terror & atmosphere building here) I think this will definitely resonate with fans of Outlast, Alien Isolation, Jurassic World Aftermath & any horror title that builds it's dread slowly rather than throwing it all into the players face at once. I'm very curious to see if the pace ratchets up as the campaign progresses onwards but so far Wraith is a downright creepy & intriguing tale that I can't wait to unravel.

WRAITH THE OBLIVION AFTERLIFE QUEST 2 GAMEPLAY // How Scary is it? Playthrough Part One / Quest 2 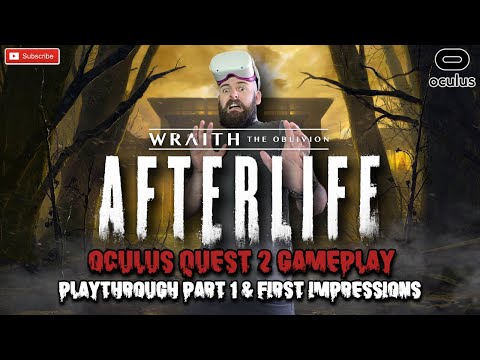 It's finally here, after months of hype, teasers & excitement I can finally enter the Barclay Mansion & put Wraith The Oblivion Afterlife to the test....